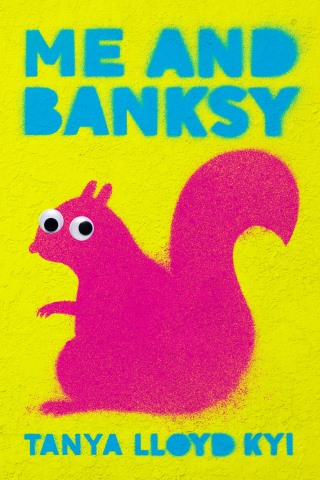 A Banksy-style protest against cameras in classrooms brings a group of middle-grade students together. For fans of Rebecca Stead, Susin Nielsen and Gordon Korman.

Dominica's private school is covered in cameras, and someone is hacking into them and posting embarrassing moments for the whole school to see. Like Ana picking her nose. When Dominica quickly changes her shirt from inside out in what she thinks is the privacy of a quiet corner in the library, she's shocked -- and embarrassed -- to discover a video has captured this and is currently circulating amongst her schoolmates. So mortifying, especially since over the past three years, they've had a half-dozen school talks about social media safety.

Who has access to the school security cameras and why are they doing this? Dominica and her best friends, Holden and Saanvi, are determined to find out, and in the process start an art-based student campaign against cameras in the classroom.

Tanya Lloyd Kyi: TANYA LLOYD KYI has worked as a typesetter, graphic designer and photo editor before pursing writing full-time. She is the author of Mya's Strategy to Save the World, as well as many non-fiction titles, including Shadow Warrior, nominated for the ALA's Amelia Bloomer Project List, and Eyes and Spies: How You're Tracked and Why You Should Know, which won the Montaigne Medal Award. She is also the author of middle-grade and YA novels, including Anywhere but Here, which was praised by Kirkus as having a main character whose "voice is convincingly filled with a combination of angst and nonchalance," and The Prince of Pot, shortlisted for the OLA White Pine Award.
www.tanyalloydkyi.com Twitter @tanyakyi