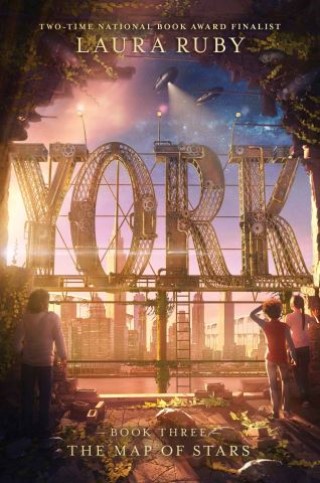 York: The Map of Stars

It was only a few days ago that Tess Biedermann, Theo Biedermann, and Jaime Cruz, along with a mysterious figure from the past, managed to survive an assault on the location of the latest clue in the Morningstarr cipher—and, in the process, made a shocking discovery about their own connection to this one-hundred-sixty-year-old enigma.

Now the friends are divided. Tess and Theo have no idea what the photo they found in Greenwood Cemetery means, but Jaime is convinced that they do, and that they’ve been keeping their own secrets from him. As the city continues to break around them, suddenly solving the greatest mystery of the modern world seems less important than saving their own friendship.

The stakes of completing the cipher, however, have never been higher. Darnell Slant, real estate developer and owner of all the Morningstarr buildings, knows that they hold one last secret: a power that even the Morningstarrs themselves never revealed. The world has rested on a precarious balance of power for generations; now Slant and his shadowy business partners aim to unbalance it.

It’s up to Tess, Theo, and Jaime to uncover the Morningstarrs’ final mystery in a desperate attempt to set things right. The world—theirs, and possibly others—depends on it.

Laura Ruby is the author of books for adults, teens, and children, including Thirteen Doorways, Wolves Behind Them All and the Michael L. Printz Medal winner Bone Gap, both National Book Award finalists; the Edgar Award nominee Lily’s Ghosts; and the Book Sense Pick Good Girls as well as the first two books in the York Saga. She is on the faculty of Hamline University’s MFA in writing for children and young adults program and lives in the Chicago area. You can visit her online at www.lauraruby.com.