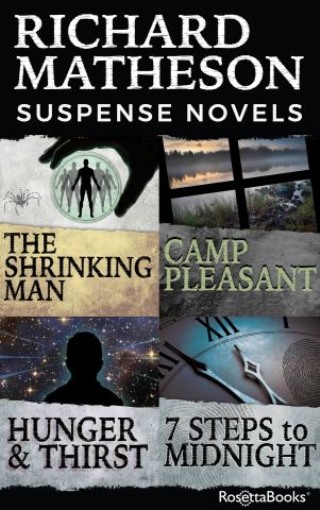 Ordinary people face hair-raising dangers in these four early suspense novels by the celebrated author of I Am Legend.

The Shrinking Man
In this sci-fi suspense classic adapted into multiple films, a man exposed to radiation begins to shrink at an alarming rate. As his life crumbles, he must survive menacing attacks from house cats and spiders.

Camp Pleasant
An idyllic summer camp turns horrifying when a young counselor is the witness to the murder of the new camp director. The mystery unfolds in a “simple style that recalls Hemingway” (Publishers Weekly).

Hunger and Thirst
In this previously unpublished early novel, a man is shot during a robbery gone wrong and wakes up to find himself paralyzed. Lying in his hospital bed, he flashes back to his difficult life and hopes for redemption.

7 Steps to Midnight
At the end of an ordinary workday, mathematician Chris Barton finds a stranger living in his house, claiming to be him. Thrust into a surreal world of violence and mystery, Chris must go on the run and follow a series of cryptic clues to regain his life.