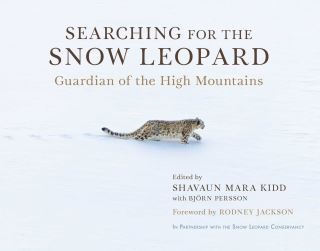 Searching for the Snow Leopard

Guardian of the High Mountains

A stunning visual and personal journey in search of the iconic big cat, the snow leopard.

The snow leopard, known as the ghost of the mountains, is an elusive predator that has captured the human imagination for eons. Yet, by nature secretive, living at altitudes of up to 19,000 feet in one of the world's harshest environments, it is notoriously difficult to see. Those lucky enough to encounter one speak of the experience as momentous, transformative, even spiritual. In this handsomely illustrated, eloquent book, published in partnership with the Snow Leopard Conservancy, world-renowned wildlife photographers, naturalists, and conservationists take the reader closer than most humans will ever get to knowing snow leopards and understanding why these beautiful big cats have for so long been considered the most mysterious of all.

More than 130 breathtaking photographs—all taken in the wild, and none with camera traps—accompany personal narratives and anecdotes that convey the experience of learning to see; the patient pursuit, following the tracks and other sign for a momentary glimpse; an unexpected encounter; watching the predator hunt; a magical moment with a mother and her cubs. A special "seek and find" section challenges readers to spot the snow leopard—to discern camouflage from rock and snow. The text also relates the natural history of the snow leopard, its cultural significance and place in lore, its interactions with local peoples, and information about its conservation.