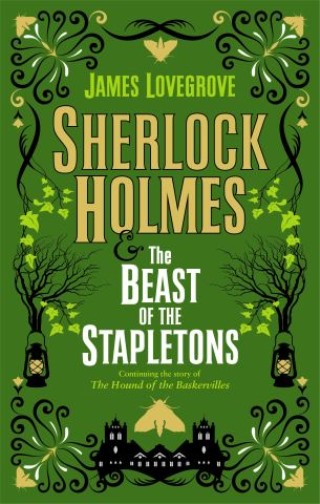 Sherlock Holmes and the Beast of the Stapletons

New York Times bestselling author James Lovegrove's continues the story of Sherlock Holmes and The Hound of the Baskervilles, as five years later, another monstrous creature stalks across Dartmoor...

1894. The monstrous Hound of the Baskervilles has been dead for five years, along with its no less monstrous owner, the naturalist Jack Stapleton. Sir Henry Baskerville is living contentedly at Baskerville Hall with his new wife Audrey and their three-year-old son Harry.

Until, that is, Audrey's lifeless body is found on the moors, drained of blood. It would appear some fiendish creature is once more at large on Dartmoor and has, like its predecessor, targeted the unfortunate Baskerville family.

Sherlock Holmes and Dr Watson are summoned to Sir Henry's aid, and our heroes must face a marauding beast that is the very stuff of nightmares. It seems that Stapleton may not have perished in the Great Grimpen Mire after all, as Holmes believed, and is hell-bent on revenge...

James Lovegrove: James Lovegrove is the New York Times bestselling author of The Age of Odin. He was short-listed for the Arthur C. Clarke Award in 1998 and for the John W. Campbell Memorial Award in 2004, and also reviews fiction for the Financial Times. He is the author of Firefly: Big Damn Hero with Nancy Holder and Firefly: The Magnificent Nine, and several Sherlock Holmes novels for Titan Books. He lives in south-east England.