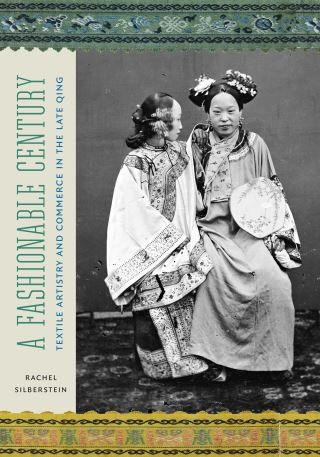 Textile Artistry and Commerce in the Late Qing

Clothing and accessories from nineteenth-century China reveal much about women’s participation in the commercialization of textile handicrafts and the flourishing of urban popular culture. Focusing on women’s work and fashion, A Fashionable Century presents an array of visually compelling clothing and accessories neglected by traditional histories of Chinese dress, examining these products’ potential to illuminate issues of gender and identity.

In the late Qing, the expansion of production systems and market economies transformed the Chinese fashion system, widening access to fashionable techniques, materials, and imagery. Challenging the conventional production model, in which women embroidered items at home, Silberstein sets fashion within a process of commercialization that created networks of urban guilds, commercial workshops, and subcontracted female workers. These networks gave rise to new trends influenced by performance and prints, and they offered women opportunities to participate in fashion and contribute to local economies and cultures.

Rachel Silberstein draws on vernacular and commercial sources, rather than on the official and imperial texts prevalent in Chinese dress history, to demonstrate that in these fascinating objects—regulated by market desires, rather than imperial edict—fashion formed at the intersection of commerce and culture.

Rachel Silberstein is a lecturer in the Jackson School of International Studies at the University of Washington.