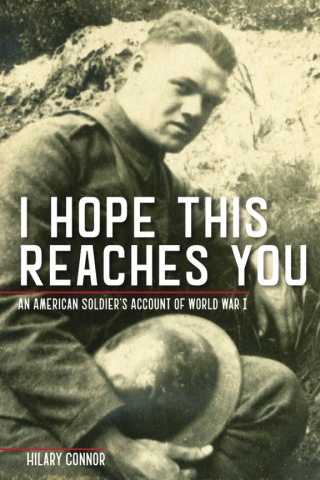 I Hope This Reaches You

I Hope This Reaches You: An American Soldier’s Account of World War I begins in May 1917 with Byron Fiske Field (1897–1968) boarding a morning train bound for Detroit with one objective in mind: to help the United States win the war against Germany. A pacifist at heart, Field had just finished his freshman year at Albion College where he was studying to be a Methodist missionary. Although he found the idea of killing another human to be at odds with his Christian beliefs, like other Americans he was convinced of the righteousness of World War I—the war to end all wars—and he was determined to do his part. In recounting Field’s story, Hilary Connor relied on four principal sources of information found in a footlocker issued to Field as a member of the 168th Ambulance Company in the 42nd Division—or as it was more famously known, the Rainbow Division. The first of these sources is a handwritten diary kept by Byron from February 1918 to July 1919. The second cache of firsthand information is contained in two books that were co-authored by Field and other select Company members in the late winter and early spring of 1919, recounting events and personal experiences of the war—The History of Ambulance Company 168 and Iodine and Gasoline. The third and perhaps most extraordinary source is a collection of over three hundred letters written by Field during the war to his parents and college girlfriend. Included in many of the letters are mementos ranging from the petals of regional flowers in bloom to Red Cross notices to church service programs and other pieces of everyday life that proved invaluable in helping to create a broader and richer historical context. The last category of material is a voluminous collection of personal papers, including academic articles, speech notes, and opinion pieces, written by Field in the decades following the war. The breadth of materials is only further enhanced by the benefit of one hundred years hindsight, lending itself to a more thorough understanding of many of the momentous events that occurred during those years. I Hope This Reaches You is a tapestry of human experience woven from the narrative threads of love, loss, loyalty, sacrifice, triumph, and tragedy that will call to any reader of historical memoirs.