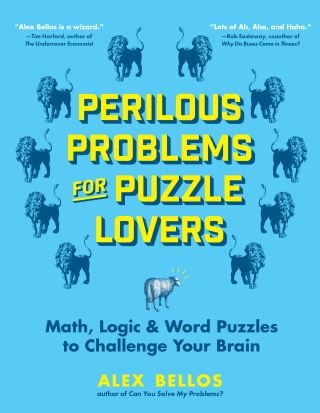 Publisher’s Note: Perilous Problems for Puzzle Lovers was previously published in the UK under the title So You Think You’ve Got Problems?

In Perilous Problems for Puzzle Lovers, Alex Bellos collects 125 of the world’s greatest stumpers—many dangerous to your person, and all dangerous to your pride. Brace yourself to wrestle with wordplay, grapple with geometry, and scramble for survival. For example . . .

Ten lions and a sheep are in a pen. Any lion who eats the sheep will fall asleep. A sleeping lion will be eaten by another lion, who falls asleep in turn. If the lions are all perfect logicians, what happens?

Bellos pairs his fiendish brainteasers with fascinating history, so you’ll meet Alcuin, Sam Loyd, and other puzzle masters of yore—in between deranged despots and wily jailers with an unaccountable taste for riddles. Will you make it out alive? And what about the sheep?

Alex Bellos:
Alex Bellos holds a degree in mathematics and philosophy from Oxford University. His bestselling books Here’s Looking at Euclid and The Grapes of Math have been translated into more than 20 languages and were both shortlisted for the Royal Society Science Book prize. His puzzle books include Can You Solve My Problems?, Puzzle Ninja, and Perilous Problems for Puzzle Lovers, and he is also the coauthor of the coloring books Patterns of the Universe and Visions of the Universe. He has launched an elliptical pool table, LOOP. He writes a puzzle blog for The Guardian, and in 2016, he won the Association of British Science Writers award for best science blog. He lives in London.