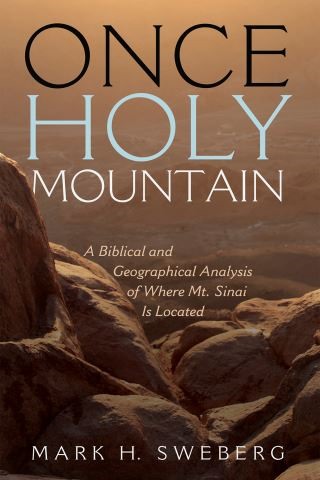 A Biblical and Geographical Analysis of Where Mt. Sinai Is Located

This book is about the location of biblical Mount Sinai. It differs from all previous works about Mount Sinai in that the research and methodology is wholly focused on the Bible text, what the Bible has to say about Mount Sinai, the physical realities that would have impacted on the Israelites that followed Moses, and what archaeology has revealed to date. Those realities influenced: the rate of travel from Egypt to Mount Sinai, route of travel, the distance traveled, the impact of the physical condition of the people and the animals that went with them, and the logistics involved. Most written works about Mount Sinai do not offer evidence from the biblical text supporting their conclusions and those that do often only cite the Bible in passing. This book holds that the historical accuracy, inerrancy, and authority of the Bible are without question. The Exodus happened and the Israelite people were freed from bondage and followed the leadership of Moses to Mount Sinai and beyond. This book focuses on the evidence and physical realities without the introduction of personal agendas or biases. The book pieces together the three-dimensional puzzle recognized as Mount Sinai in the Exodus and identifies where Mount Sinai is located based on the evidence presented throughout.

Mark H. Sweberg: Mark Sweberg is currently in the final stages of acquiring his PhD in Biblical Archaeology. He has participated in the Tal el-Hammam Archaeological Excavation in Jordan uncovering the ancient biblical city of Sodom. In 2017 Mark served as one of the deputy dig directors for that season.

This is Mark’s first book. He has written numerous articles on metal detecting, which have appeared in a number of magazines including Western and Eastern Treasures and Lost Treasure. Mark also has a Bible background in the Tanakh (Old Testament) and served as a community Jewish Lay Leader for a military installation in Arizona that did not have an assigned rabbi. Mark’s prior life included twelve years with the US Department of State and a full career as an officer in the US Army. Mark is married to his beloved wife Nancy and is blessed with four children and six grandchildren.