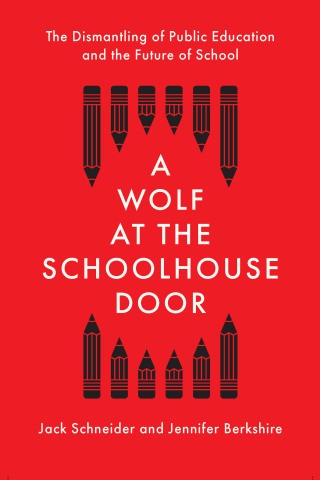 A Wolf at the Schoolhouse Door

The Dismantling of Public Education and the Future of School

Timely book for the 2020 political moment: Public education policy, reform, and funding is certain to be a hot and contentious media topic at the state and national level leading up to and in the wake of election season.

Robust digital platform: The authors co-host an education podcast "Have You Heard" and each has a growing, devoted audience. Berkshire has 11,500 Twitter followers and Jack Schneider has 6,200 engaged followers.

Established media relationships to tap for promotion: Jennifer is currently the education editor at Alternet and both have been published in trade and mainstream outlets, such as The Atlantic and The Baffler.

First trade book by authors who are well-credentialed and well-positioned: Jack is an award-winning historian of education and has been a classroom teacher. Jennifer developed a loyal fanbase through her wildly popular blog Edushyster (since renamed "Have You Heard") and has bonafides from her 6+ years editing the newspaper for the American Federation of Teachers in Massachusetts. Both have regular speaking engagements on panels, with community groups, school organizations, and school districts, and growing profiles among classroom teachers and activists. Jack is a rising star in academia who has near celebrity status at conferences, including AERA, the largest annual ed research conference.