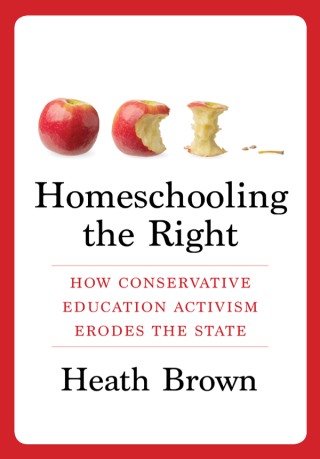 For four decades, the number of conservative parents who homeschool their children has risen. But unlike others who teach at home, conservative homeschool families and organizations have amassed an army of living-room educators ready to defend their right to instruct their children as they wish, free from government intrusion. Through intensive but often hidden organizing, homeschoolers have struck fear into state legislators, laying the foundations for Republican electoral success.

In Homeschooling the Right, the political scientist Heath Brown provides a novel analysis of the homeschooling movement and its central role in conservative efforts to shrink the public sector. He traces the aftereffects of the passage of state homeschool policies in the 1980s and the results of ongoing conservative education activism on the broader political landscape, including the campaigns of George W. Bush and the rise of the Tea Party. Brown finds that by opting out of public education services in favor of at-home provision, homeschoolers have furthered conservative goals of reducing the size and influence of government. He applies the theory of policy feedback—how public-policy choices determine subsequent politics—to demonstrate the effects of educational activism for other conservative goals such as gun rights, which are similarly framed as matters of liberty and freedom. Drawing on decades of county data, dozens of original interviews, and original archives of formal and informal homeschool organizations, this book is a groundbreaking investigation of the politics of the conservative homeschooling movement.

Heath Brown: Heath Brown is associate professor of public policy at the City University of New York, John Jay College, and the CUNY Graduate Center. His books include Immigrants and Electoral Politics: Nonprofit Organizing in a Time of Demographic Change (2016) and The Tea Party Divided: The Hidden Diversity of a Maturing Movement (2015).