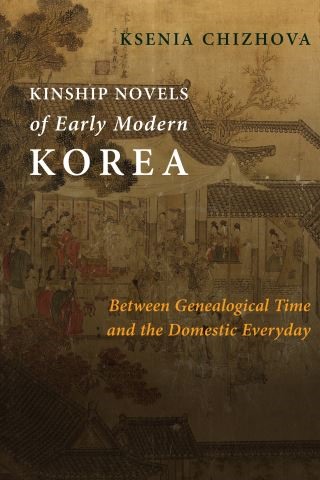 Between Genealogical Time and the Domestic Everyday

The lineage novel flourished in Korea from the late seventeenth to the early twentieth century. These vast works unfold genealogically, tracing the lives of several generations. New storylines, often written by different authors, follow the lives of the descendants of the original protagonists, offering encyclopedic accounts of domestic life cycles and relationships. Elite women transcribed these texts—which span tens and even hundreds of volumes—in exquisite vernacular calligraphy and transmitted them through generations in their families.

In Kinship Novels of Early Modern Korea, Ksenia Chizhova foregrounds lineage novels and the domestic world in which they were read to recast the social transformations of Chosŏn Korea and the development of early modern Korean literature. She demonstrates women’s centrality to the creation of elite vernacular Korean practices and argues that domestic-focused genres such as lineage novels, commemorative texts, and family tales shed light on the emergence and perpetuation of patrilineal kinship structures. The proliferation of kinship narratives in the Chosŏn period illuminates the changing affective contours of familial bonds and how the domestic space functioned as a site of their everyday experience. Drawing on an archive of women-centered elite vernacular texts, Chizhova uncovers the structures of feelings and conceptions of selfhood beneath official genealogies and legal statutes, revealing that kinship is as much a textual as a social practice. Shedding new light on Korean literary history and questions of Korea’s modernity, this book also offers a broader lens on the global rise of the novel.